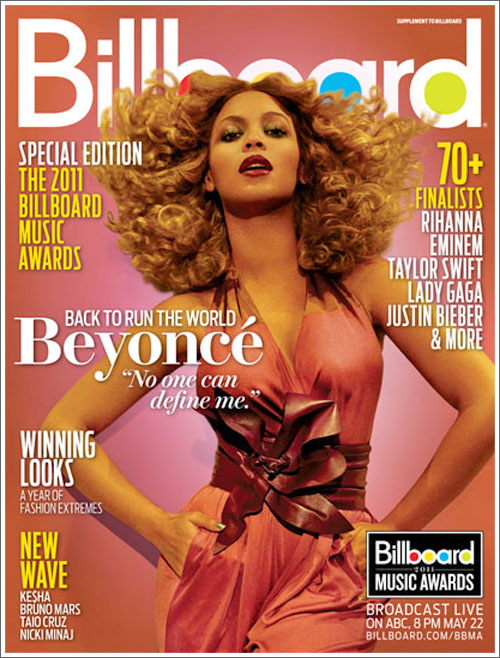 Beyoncé is the face of this week’s cover of Billboard Magazine. In this issue, Beyoncé explains the title of her new highly anticipated album “4“, the direction of her career and becoming a recipient Billboard’s Millennium Award. Take a look at the Q&A Billboard exclusive had with Beyoncé after the cut.

Whenever you put out a new song, it seems to generate a catchphrase. Is that something you think about?

That’s what I always want to do – I’m attracted to songs that will become a dinner conversation! [laughs] With “Single Ladies,” clearly I’d just gotten married, and people want to get married every day – then there was the whole Justin Timberlake thing [recreating the video] on “Saturday Night Live,” and it was also the year YouTube blew up. With “Irreplaceable,” the aggressive lyrics, the acoustic guitar, and the 808 [drum machine] – those things don’t typically go together, and it sounded fresh. “Crazy in Love” was another one of those classic
moments in pop culture that none of us expected. I asked Jay to get on the song the night before I had to turn my album in – thank God he did. It still never gets old, no matter how many times I sing it.

The new single, “Run the World (Girls),” is a very bold statement  for you.

It’s definitely riskier than something a bit more…simple. I just heard the track and loved that it was so different: it felt a bit African, a bit electronic and futuristic. It reminded me of what I love, which is mixing different cultures and eras — things that typically don’t go together — to create a new sound. I can never be safe; I always try and go against the grain. As soon as I accomplish one thing, I just set a higher goal. That’s how I’ve gotten to where I am.

The new album is called “4.” Aside from this being your fourth solo album, what significance does that number hold?

We all have special numbers in our lives, and 4 is that for me. It’s the day I was born. My mother’s birthday, and a lot of my friends’ birthdays, are on the fourth; April 4 is my wedding date.

How did the creative process begin with the new body of work?

I recorded more than 60 songs: everything I ever wanted to try, I just did it. I started off being inspired by [Afrobeat music pioneer] Fela Kuti. I actually worked with the band from “Fela!” [the hit Broadway musical based on his life] for a couple of days, just to get the feel for the soul and heart of his music; it’s so sexy, and has a great groove you get lost in. I loved his drums, all the horns, how everything was on the one. What I learned most from Fela was artistic freedom: he just felt the spirit. I also found a lot of inspiration in ’90s R&B, Earth, Wind & Fire, DeBarge, Lionel Richie, Teena Marie… I listened to a lot of Jackson 5 and New Edition, but also Adele, Florence + the Machine, and Prince. Add in my hip-hop influences, and you can hear how broad it is. I also gave myself more freedom to really belt out some songs, and bring soul singing back: I used a lot of the brassiness and grittiness in my voice that people hear in my live performances, but not necessarily on my records.

You’re an icon of female empowerment. What does power mean to you?

Power means happiness, power means hard work and sacrifice. To me, it’s about setting a good example, and not abusing your power! You still have to have humility: I’ve seen how you can lead by example, and not by fear. My visit to Egypt was a really big inspiration for me. Once the sun went down, I saw not one woman; it was shocking and fascinating to me, because it was so extreme. I saw thousands of men walking down the street, socializing in bars, praying in mosques – and no women. I felt really proud when I performed and saw the strength that the women were getting through the music. I remember being in Japan when Destiny’s Child put out “Independent Women,” and women there were saying how proud they were to have their own jobs, their own independent thinking, their own goals. It made me feel so good, and I realized that one of my responsibilities was to inspire women in a deeper way.

You’re always on the go. Do you ever get downtime?

I got a day off to take my nephew to Disneyland, which was so much fun. I haven’t done anything like that in probably 10 years – the last time I was at a theme park was with Destiny’s Child! We rode all the rides, some of them twice, and it was my nephew’s first time on a roller coaster. There were thousands of people there because it was Easter, but everyone was really polite and respectful, and let us walk around and have a great time. I had on the biggest Goofy hat! [laughs] It was supposed to be a disguise, with this big brim that covered my face, and floppy ears on the sides, but by the end of the trip I realized that people knew I was making a fool of myself in this hat. [laughs] It was a really nice memory for me.

This is your first record that you’ve made without your father managing you. What sort of options opened up that may be different than before?

It’s not that anything bad happened between us. My family has my support always, and they support me, but when you’ve been working with the same people for 15 years, it’s natural to eventually have your own ideas. I believe that parents prepare their kids for the moment that they’re on their own: at this point, I’m taking everything my dad and my mother have taught me, and I’m able to do things my way. We were at a point where we’d learned so much from each other, and now it’s exciting for me to do this on my own and hire my own team. I’ve started managing myself.

Your film career recently took an interesting turn. You’ve gone from “Dreamgirls” to “Cadillac Records” to “Obsessed,” and now you’re working with Clint Eastwood on the latest remake of “A Star is Born.”

It’s a dream come true; I’m still in shock that it’s really going to happen. Clint Eastwood is clearly the absolute best, and I’m so honored and humbled. I was in no rush to do another movie unless it was the right film, and I didn’t even want to touch “A Star is Born” unless it was with him. I actually learned that this project was in existence, and kind of claimed it. I want to get to work right now!

“A Star is Born” is an appropriate choice, as it follows the rise of a female singer to stardom. What have been your milestones on the way up?

I would say when Destiny’s Child worked with Wyclef Jean on “No, No, No Part 2” – we were so young and green and in awe of everything, and couldn’t wait to sing for him. And winning our Grammy for “Say My Name” was incredible. I remember hearing the song on the radio for the first time: I felt like “Wow, this sounds like a classic – something that will be around forever.” Those melodies and that fast, staccato way of singing created a new style; it inspired a whole movement in R&B. Being part of that was amazing.

After all those achievements, what was it like going solo?

Scary and empowering! Everyone in the group was very nervous, and terrified to do things on our own. We missed each other; it was hard having to make your own decisions and not have someone there to say, “I agree” or “I don’t agree.” But going through that is a part of life; it was a big first step for me, but one of many first steps I’m sure I’ll have. I kind of feel like that now again.

I’m approaching 30, and finally took a break in my life, which I’ve never had. I took more than a year off: I traveled around, spent time with my husband, woke up in my own bed, ate whatever I wanted, went to museums and Broadway plays, watched documentaries, and just had life experiences. I never get to go to concerts because I’m usually performing, so I saw so many shows – great bands, like Muse and Rage Against the Machine, that also inspired the album. There were a lot of artists I’d never been exposed to: I’m like a sponge and soak everything up, and I learned so much from watching these great performers. Having time to grow as a human being was really inspiring, and gave me a lot to pull from. I’m excited about growing: I can just have fun, and the artistic freedom to do whatever I want. At this point, I really know who I am, and don’t feel like I have to put myself in a box. I’m not afraid of taking risks – no one can define me.

Video: When Chris Brown Was 17…