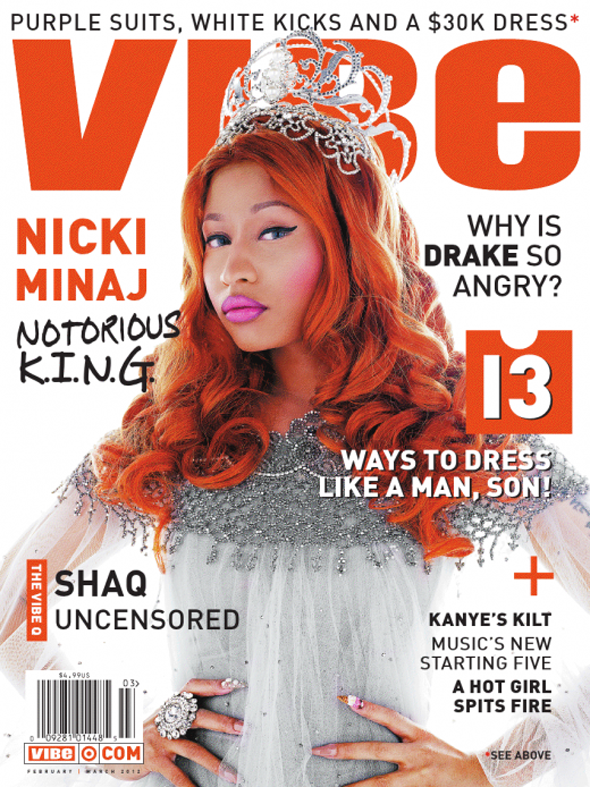 Nicki Minaj will be covering the upcoming 2012 February/March issue of VIBE Magazine. In this issue, Nicki talks being a woman in Hip-Hop, what “Pink Friday” proved and high fashion. Read a few excerpts from the article after the cut.

VIBE: You’ve said before that you didn’t really have fun recording Pink Friday.

Nicki Minaj: I felt like I had something to prove to everyone who said a female rapper could not make an album unless she was talking about her pussy. And so I went above and beyond to prove that I could not talk about sex and not talk about my genitalia and still have a successful album. And I proved that. And now my time for proving things to my critics is over. I don’t really need to prove anything to anyone else anymore.

Is it still hard to get your way as a woman in this industry?

It’s not hard to get your way when it’s your way or the highway. People either follow suit or they’re not around. I don’t really like the sound of that, ‘cause that sounds like a temper tantrum. I’m just very black and white when it comes to my business. There’s really no gray area. I really don’t have a lot of small talk with people I work with. It’s pretty much let’s get the job done. In the beginning, if people didn’t know me they’d probably assume I wasn’t smart or wasn’t business savvy. But once you sit and talk to me, it’s a different story.

You were heavy on the fashion scene last year around Fashion Week with Anna Wintour. Do you feel like you’ve been accepted by the fashion world?

Yeah, I realized more recently that even if it’s for a fashion magazine, I’m not gonna change who I am. When I was doing photo shoots last year, I kept on being told, “This is what we want your hair to look like and this is what we want you to look like,” and it really, really stifled my creativity. So the other day I was talking to a photographer, and he said, “You know what, I like your everyday looks so much better than when you do photo shoots for magazines.” And I was like, “So do I, you’re absolutely right.” I’d been getting more and more frustrated for a while.

But I’ve made up my mind that when you see a Nicki Minaj magazine cover from now on, it’s really going to reflect me and it’s going to be something that I creatively had a hand in, because I don’t have to do it anymore. I don’t have to do things just to please people. It’s okay to do what I love because what I love, my fans love. And they’re really the only ones that should matter. The fashion world will have to come to Nicki Minaj, as opposed to Nicki Minaj trying to go to the fashion world.