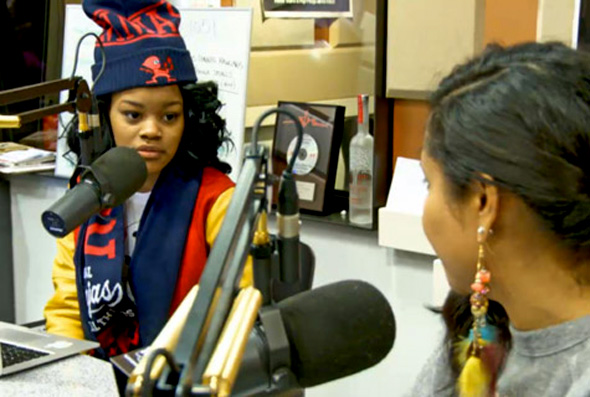 Teyana Taylor showed up to get Power 105.1 station to be intervied by the Breakfast Club. Teyana talked briefly on being released from Star Trak Ent./Interscope and possibly signing to G.O.O.D. Music, her friendship with Chris Brown, filming a role in Gang of Roses alongside Wiz Khalifa and her upcoming EP titled The Misunderstanding of Teyana Taylor due February 28th. Read the excerpts + watch the full interview after the cut.

On being a free agent: “I’m in a LeBron kinda situation. I’m trying to see where I want to take my talent. By the way, I was not dropped. I got an officialrelease.”

On her breakup with Milwaukee Bucks player Brandon Jennings: “We’re both hard workers, but we’re both not where we wanna be yet. I need him to focus to get there and I need to focus to get where I wanna be. You never know what the future holds. We’re super cool and I actually respect him for that. We can finish what we started another time, but right now, [the focus is] my EP and the NBA.”

On her sexuality: “When I first came out with the sneakers and stuff, mind you I’m only 15 years old, so the fact that I was actually dressing my age, I was gay to the world. But now everybody’s wearing sneakers and it’s sexy. The tomboy thing is in now. It’s actually better for me, so they can stay out of my business when I am dating.”

Teyana Taylor Releases Made It & Bare With Me