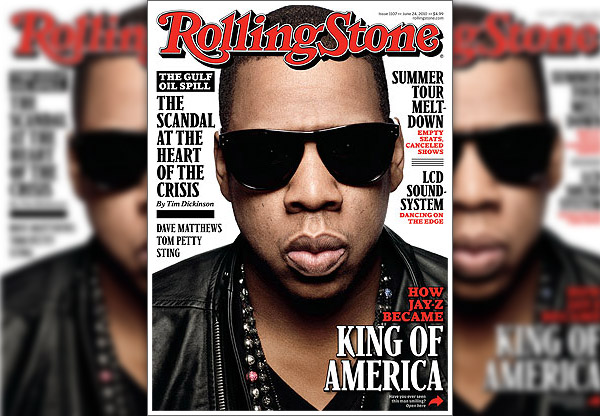 Rolling Stone names Jay-Z “King of America” in the latest June 2010 issue which is currently on newsstands. In the issue, Rolling Stone contributing editor Mark Binelli got Jay-Z to open up about his wife Beyoncé taste decor in their 8,000 Tribeca penthouse:

While Jay is notoriously private about his life with wife Beyoncé, Binelli gets the rapper to let down his guard, and Jay reveals his superstar better half vetoed a piece of artwork he’d bought for their 8,000-square-foot Tribeca penthouse. The black-and-white Laurie Simmons photograph in question depicted “a noirishly lit pistol with a pair of women’s legs emerging from the handle… Beyoncé sent it back and had it replaced with a similar Simmons piece, only depicting a perfume bottle instead of a gun.” Binelli also encourages Jay to open up about his biggest challenges as president of Def Jam (the most frustrating meeting? “Honestly? All of them”) and his one and only experience in therapy, when as Binelli writes, “The psychiatrist gave him tea that made him sleepy and asked him questions like, ‘Who are your best friends?’ ”

Pick up your issue on newsstands today!