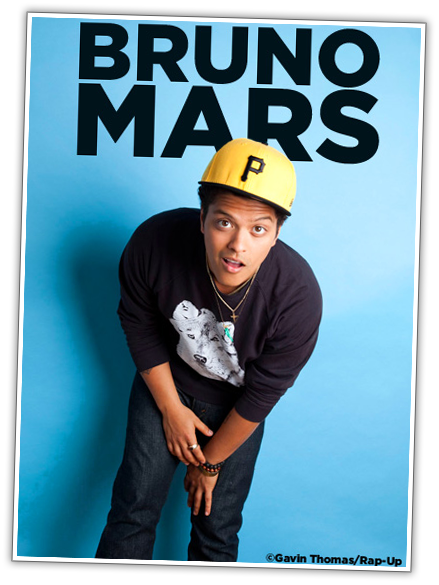 Singer-songwriter Bruno Mars sat down with our friends, Rap-Up Magazine, and talked about what he was doing at 18, his transition from moving from Hawaii to L.A., and what we can expect from his debut album Lady Killer due later this year. Check out the interview after the cut!

1. You’re 23 years old now. Let’s rewind to 18. What were you doing at that age, during this same moment?
I just got signed to Motown Records as a solo artist. But I was too young. I had been doing shows my whole life. I had never really recorded, and never had too much experience recording. Let alone producing, I had never written a song before. It worked out the way it had to work out because I needed to learn a lot.

2. How’d your moniker come about?
Bruno is after Bruno Sammartino, who was this big fat wrestler. I guess I was this chunky little baby, so my dad used to call me that as a nickname. The Mars came up just because I felt like I didn’t have no pizzazz, and a lot of girls say I’m out of this world, so I was like I guess I’m from Mars.

3. Why did you decide to leave Hawaii to pursue a music career in L.A.?
I accomplished a lot in Hawaii as an entertainer, but never really dabbled in original music. I was like a circus freak—I used to sing songs, I used to open up for a Las Vegas-style magic show. I’d sing songs for all the tourists. It was always cover songs—everything from Chuck Berry to Usher. Then I got fed up, like I’m singing songs to a bunch of tourists that don’t even speak English. I felt like I could do more. I do miss Hawaii though. People over there are real content and satisfied with just being on an island, having kids at a very young age. It’s not like you’re trying to be an actor or trying to be a musician with millions of other people, and it’s just hustle, hustle, hustle. That’s what I miss the most, just going down there and everyone’s just living life, as opposed to grinding. 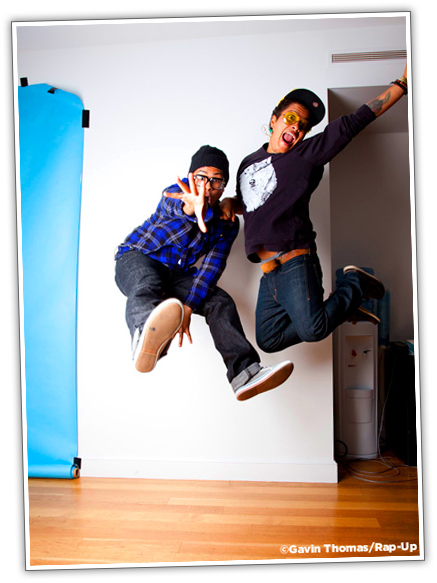 4. Did you have any weird moments when you first arrived in L.A. that made you think, “This place is crazy”?
I remember pulling up to my parking stall one day and there was this homeless guy just squatting and turding all over. That was my “Welcome home.” At that time, I was driving a Volkswagen Jetta. It had one window that wouldn’t roll down in the summer and no locks on the door. And of course no radio or no AC.

5. What’s the significance of some of your tattoos?
The last tattoo I got was my mother’s name on my arm, Bernadette. The first one I ever got, I was 19, it was a sacred heart. I got it upside down. It basically looked like an ass shooting fire. I had it for about two years before I was like, “Let me do something about this.” So I got it covered up. My mom’s reaction to my first tattoo was, “Why are you marking up your body?” Then after I showed her I got her name tattooed on me, she was ecstatic.

6. Besides “Nothin’ on You,” which record are you and The Smeezingtons most proud of creating?
For me, there’s a song we did with K’naan featuring Adam Levine called “Bang Bang.” That kinda established our sound as producers because it was one of the first songs we did. That was for K’naan’s album, Troubadour. We had [Maroon 5 frontman] Adam Levine sing the hook, which was pretty big. I think if you listen to “Bang Bang” and “Nothin’ on You,” they could’ve been on the same album because it’s like this different hip-hop with live instrumentation. I think our strong point is live instrumentation.

7. How do you, Phil, and Ari decide on a final product during the recording process?
Bruno: Phil throws a fit.
Phil: I’m the strongest, so we arm wrestle.
Bruno: Well, that’s why we’re together because we don’t have those problems. We all trust each other’s judgment. Sometimes I’ll be like, “I really don’t like that.” And both Ari and Phil will be like, “You’re trippin’, dog, you’re trippin’.” Or I’ll play something, then Phil will sing it, and then we’ll find it. We’re not the greatest musicians in the world, but we can make some hot shit.

8. What is your thought process when going in to make a record?
I think it always happens differently. Sometimes we’ll have a melody first. Sometimes we’ll hear someone say something, “I believe in magic.” Then it’ll be like, “Wow, that really resonated.” So I’ll go write that down on a piece of paper. Then we’ll take that melody that he hummed or I hummed and we’ll try to put that little phrase in there. But it always works differently. Some people like to call it math, we call it science [laughs].

9. Are there any songs you felt embarrassed about creating?
Bruno: This is like two years ago. We were getting drunk in the studio one night and this guy was playing a track and we wrote this song called “Bedroom Bandit.” We swore it was a smash. Then we sobered up the next day. Phil, don’t sing it.
Phil: It was really bad. [Sings] I said you can’t tie me down, shorty, I’m already with the next girl/ You can’t tie me down, ’cause I’m the bedroom bandit.

10. What can we expect from your full-length debut album Lady Killerthat’s set for release later this year?
You can expect that we’re gonna put our balls into it. Luckily, I feel like everything that we’ve been working for and everything we’ve learned in the past couple years has really enhanced our production and our writing. I guess we’re at our most creative zone right now. We’re excited that “Nothin’ on You” and “Billionaire” are both getting love and they’re kinda two totally different sounds. That’s always been our struggle ’cause we love so many kinds of music. Like I play the guitar on stage. I love old R&B and all that. I think that’s kinda helping us break as artists because people don’t know what to expect, which is a good thing. I’d love to work with Danger Mouse, I love Mark Ronson. Mark Ronson gets the live instrumentation without it sounding too adult contemporary. There’s a fine line.

Bruno Mars – “It Will Rain”