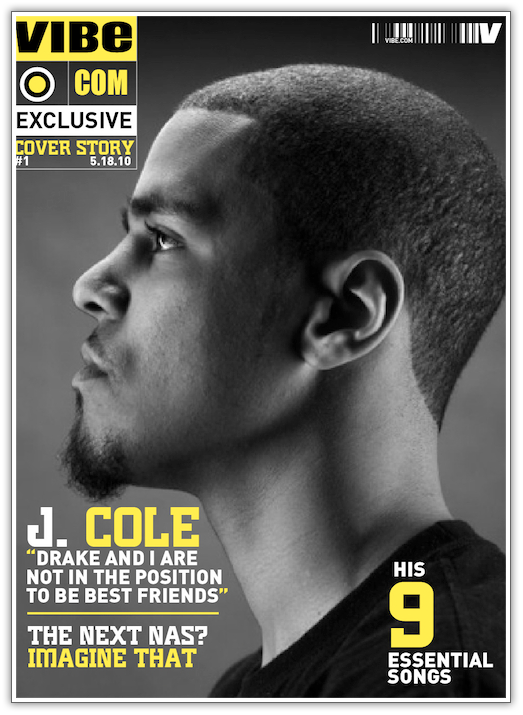 Vibe.com spoke to Roc Nation‘s golden child, J. Cole, about his untitled debut album, his thoughts on Drake and how his relationship with Jay-Z has evolved. Read some excerpts from the interview after the cut:

What were Jay’s words when he first heard the single?
He liked it a lot, said the beat reminds him of a Biggie’s “Hypnotize.” I believe him. That’s why they call him Hov [laughs].

When I first interviewed you last year, you said your conversations with him were limited. Has that relationship changed?
Now it’s more… I think his brain is in the same boat as mine. He’s really in executive mode like, ‘How can we take this kid to the next level. What do I need to be doing as Jay-Z to help this kid.’ I can see that all in his moves.

Do you have an album title?
Yeah, but it may change next week so I don’t want to put it out there yet. Fans keep saying, Cole World and The Blow Up, but neither of those are it. Four months ago I was sold on one, but it restricted me a little bit. And I was smart about it because I didn’t go shout out the title as soon as I had it. I know how the game works and people don’t really understand that I have the right to change my mind.

About a month ago, Drake mentioned the possibility of you jumping on a Thank Me Later bonus cut. Fact?
Man, me and Drake have been trying to get something done. Actually, if he reads this, tell him to send the shit he supposed to send. [Laughs] I understand we both busy and we spoke about doing some shit, but I guess schedule wise it hasn’t worked out. That would be ill, but as of now it’s not done.

Check out the video below and read the full interview here.

Track-by-Track Review of J. Cole’s The Off Season