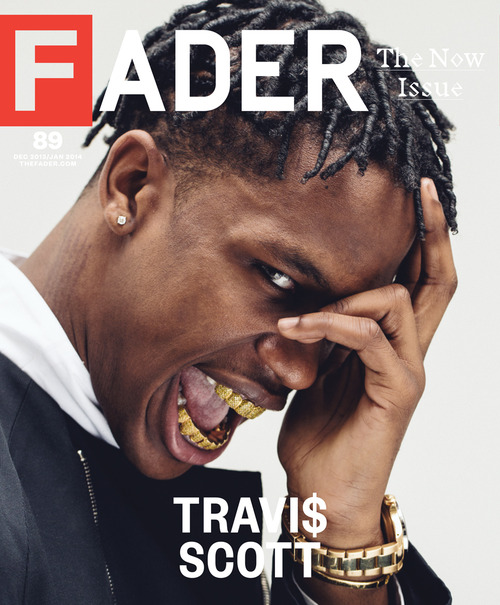 Travi$ Scott shows up on the Dec. 2013/Jan. 2014 issue of Fader magazine. In the issue, Travi$ talks Los Angeles, discovery of producing, and his sound in the latest issue. View an excerpt from the issue below + gallery from the article below:

Scott’s sound is ambitious, but it isn’t exactly experimental. Instead, he’s working in the anything-goes mold already supplied by numerous artists before him: West’s towering artistic statements, T.I.’s elastic voice, the Neptunes’ digital experimentation. Like any kid that grew up in the internet era, Scott has absorbed everything around him, blended it together and come out with a style that is a product of all music everywhere existing on the same plane. Nothing is off-limits when you have access to everything. And with that access, Scott is dead-set on mastering every art form he takes on. “I was always about doing both,” he says of rapping and producing. “I wanted to learn. I wanted to know how to do it. That was my biggest thing about everything. I wanted to know how to use everything. That’s why I do videos. I know how to work a camera, edit a video. I just want to know. I don’t like someone knowing more than me.” His music is an appropriately cinematic reflection of his open mind and keen ear, blending iconic phrases from other people’s radio hits with a production style that evokes every regional rap trope, from New York’s claustrophobically heavy drums to LA’s slow-rolling funk, without sounding like much of an imitation of any of them.