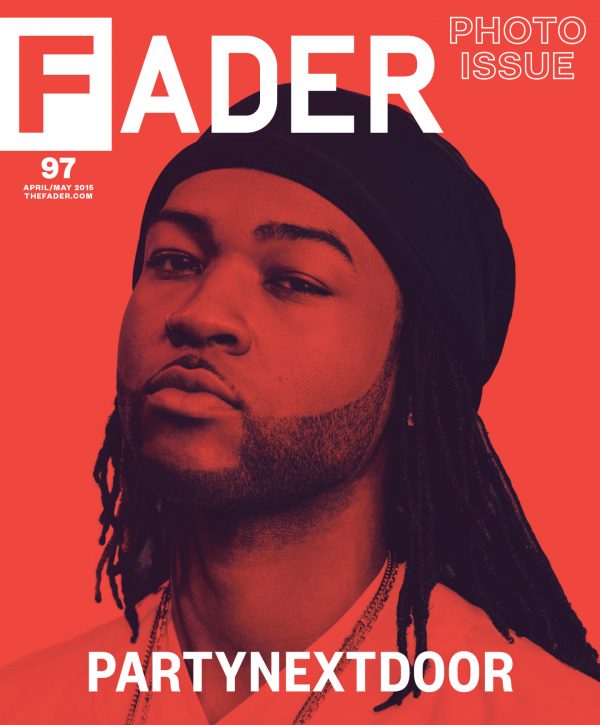 PARTYNEXTDOOR makes his first ever interview with FADER Magazine and discusses being discovered on MySpace, working with Drake and comparisons to The Weeknd in the cover story on FADER.COM. Read a few excerpts from the issue below + view the images of the cover shoot in the gallery below.

On Comparisons to The Weeknd

“People throw that [Weeknd comparison] over me because I came at a time where people assumed I was there to fill a void,” he says, alluding to The Weeknd’s departure from the OVO fold in 2012. And though PARTYNEXTDOOR’s music includes touchstones of the “dark” aesthetic The Weeknd became known for—mentions of drug use, screwed-up vocals, gloomy sax riffs—Party considers the idea an affront to his versatility. “A lot of things that came out of Toronto were darker at the time. But me? I’m all about colors. I’ll flip samples where one’s a completely dark song and the next one is a complete sexual song. People think my whole thing is a dark thing, but I don’t.”

“I was one of those guys on Myspace who had one of those fake hit counters.” He reached out to established producers and labels, hoping to build a collective of likeminded creatives, but those who responded politely declined. “They just didn’t see it,” Party says. “So I was like, ‘Okay, cool, Imma learn how to produce my own beats,’ and I stuck to it. Now, it’s hard to even take a beat from anyone else.”

“Oliver called me back in the morning,” Boi-1da remembers. “When you get a call from Oliver, it’s serious. Then Drake hit me back like two days later, like, ‘Yo, that Party kid’s nice!'” Party says his first meeting with the OVO camp took place in the back of El-Khatib’s Range Rover, “on some random street” in Toronto. Now, El-Khatib tells me that it’s Party’s uncompromising vision that makes him OVO’s secret weapon. “He’s the rare breed that writes, produces, engineers, performs, sings—all in one artist. He’s pulling all of the strings, he’s doing everything, so you hear his final production exactly the way he envisions it,” he says. “That is a privilege for any artist. You look at the only other artists that are able to manipulate like that, and it’s Kanye West.”

Drake remixes PARTYNEXTDOOR’s “Freak In You“