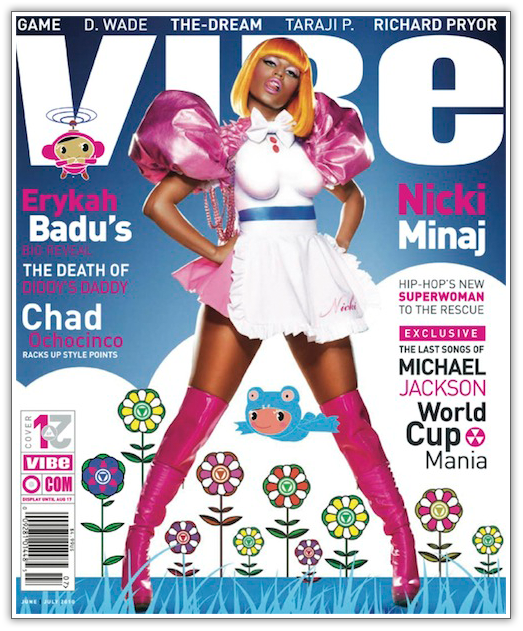 Remember that sneak peek from last week, well, this is the actual cover of Nicki Minaj June/July issue of Vibe. Read some of the excepts from the issue below:

“People don’t get when you’re off, or you’re having a bad day,” she says, obliquely referring to the photograph that bounced around the blogs of her hand- in-hand with Diddy, looking especially miserable. The speculation was inevitable: Had she been crying? Was she just tired? Are they doing it?

On her Animated Lyricism

“I’m not abandoning the funny voices. I just did a crazy tribute to ODB’s ‘Shimmy Shimmy Ya,’” she says, perfectly impersonating the late Wu-Clansman. “But it’s coming up more with the album. I had a teacher in elementary who would stand on her table and whisper. We’d all turn around like, ‘What is this lunatic doing?’ But she would achieve what she wanted. She wanted us to stop talking and listen. I feel like I need to mellow it down so people can hear what I have to say.”