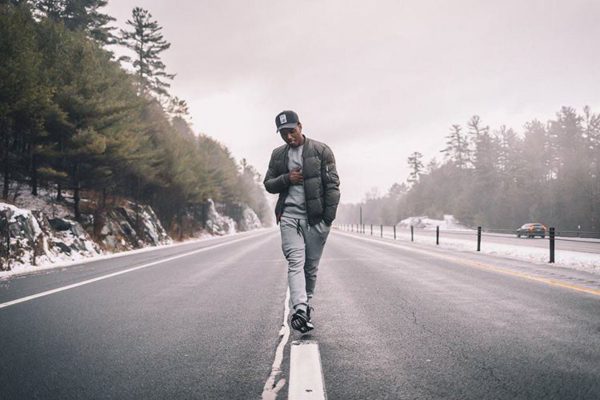 We caught up with Toronto-native crooner Jahkoy backstage at Chicago’s House of Blues for Tinashe‘s third tour date on the Joyride World Tour. We spoke with Jahkoy about the sound of Toronto, SXSW, his single ‘Odd Future,’ touring with Tinashe and artists he’s listening to right now.

You checked out the first print issue of the magazine?

Being on tour with Tinashe, how’s it been so far?

It’s the third date and it’s been really dope. She’s got great energy. She’s a great performer. I never seen her live until being on tour with her and she’s really, really good.

Yeah, I gotta give credit when credit is due!

How did that happen, being able to tour with Tinashe?

We’re under the same booking agency CCA. So that’s how everything worked out.  I just finished my project and I’m getting some tour experience and they figured our sounds would fit well together.

Definitely, the vibes are kind of similar.

If you could describe your sound in one word: what would it be?

Because it’s very diverse. It’s no such thing as a genre when it comes to my music. I eliminate that whole label or stigma of ‘R&B,’ ‘House,” and ‘Rap’ or whatever genre you wanna call it. I would categorize it as bipolar ’cause you get a little bit of everything.

What was your first concert ever?

How did that first concert shape your musical taste?

It made me see the artist in a different outlook because I had never seen Rick Ross live before. You get to see and experience the audience engage with the artist. In terms of them actually being there and delivering the music as opposed to just hearing it at home was mesmerizing.

I hear an accent, where is that coming from?

I wouldn’t call it an accent, but I just speak English. I don’t speak any other languages. [laughs]

Yeah, I guess it’s because growing up at home, my mom is Jamaican and my dad is Aromo which is in East Africa, small country.

Being from Toronto, how easy is it to be compared to OVO Sound artists like Drake, PARTYNEXTDOOR, and etc?

I feel like it’s not comparison but people more so trying to figure out what it is with the whole ‘sing-rap’ aspect. It’s automatically going to be put in that world. If it was someone in Atlanta doing a ‘rap-sing’ track they would get compared to Andre 3000, it’s always in that world of residency.

Yes, but I also think people forget that it’s always been popular: Ja Rule, 50 Cent, etc. People forget that. I think now that we have the internet it makes it more ‘hype’ around people who are doing it now.

I love the vibe your new single Odd Future is omitting. Was it a conscience ode to the collective OFWGKTA as well as a personal narrative?

This might sound bad but I’m not a big fan of the collective Odd Future. I never really listened to the group. The song is one of those things where you know in a relationship you have a lot of high hopes and expectations and expect the future of the relationship is positive. I figured every relationship that once its ended it becomes this ‘Odd Future’. You get thrown off by the unexpected things that happened so you have to move on.

I seen you vibing with Jaden Smith are there any other artists that you’ve met or close to in the industry?

I would have to shout-out my dude Elijah Blake, James Flauntleroy, DJ Dahi.

What new albums are you listening to?

I was just gonna ask you if you heard that new Rihanna?

That new Rihanna is fire!

Yeah, your boy James Flauntleroy has a lot of writing credentials on that joint.

Begins to name tracks from the album: Desperado, Needed Me, Work, Consideration

Rihanna just came through with mad hits on this album and that’s what I love about Rihanna’s album because it’s ‘bipolar’ it doesn’t give you one sound — it gives you variety. It’s like: What’s your preference? What your mood right now? This is [the song] I’m gonna play right now. You’re never stuck in that monotone sound that you keep hearing in every record on other albums.

I also feel like y’all vibes match as well with the West Indies flavor, I guess that’s automatically a connection.

Any other albums besides Rihanna you’re vibing to?

What’s your sneaker of choice at the moment?

No, but you’re wearing adidas so it’s lit!

A fun one: Fuck, Marry Kill?

I seen Jhene do this on the radio one time.

We just recently got this brand All Saints in Toronto and I really like it.

Yes. All Saints is dope.

What’s the one classic album you can’t live without?

Craig David’s Born To Do It

Catch the tour dates of Jahkoy while on the Joyride World Tour and SXSW below.