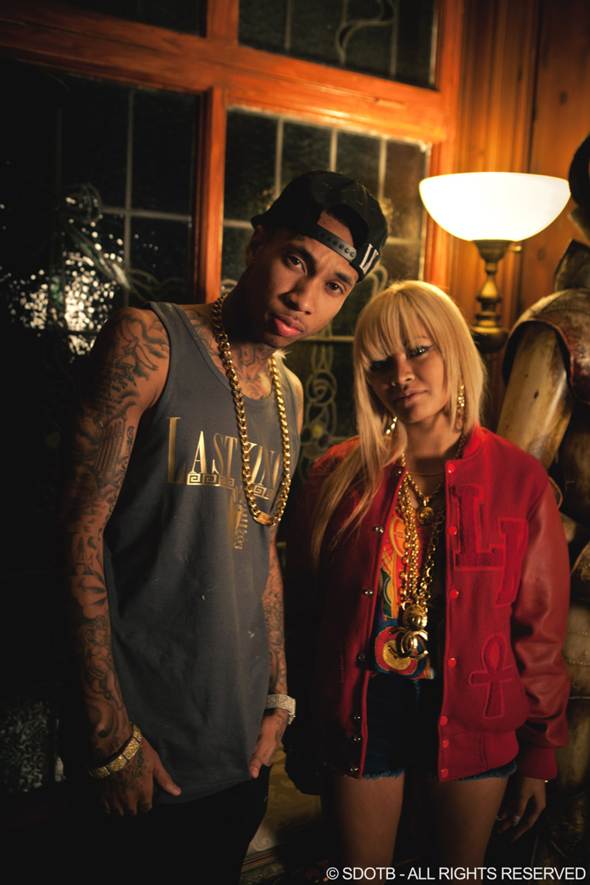 Honey Cocaine took to TinyChat to clear up some of the reports regarding the shooting in Omaha, Nebraska after Tyga’s headlining show during the Careless World Tour Monday evening (March 19) another member of his entourage wounded from the gunfire. Take a look at the video of Honey Cocaine explain the details of her injury and the aftermath after the cut. V6M also got a chance exclusively to speak to Honey Cocaine in another video below.

“Basically you guys seen the video of Tyga, yelling at people on stage because they were being disrespectful. So I was reading all the stories today and alot of them are true [but] it’s been all twisted; you feel me? So I’m gonna tell you guys what really went down.”

“So motherfuckers are being disrespectful throwing shit onstage I didn’t really say anything but then after a while shit just got like too much so he’s just like, meet me outside whatever.”

“So that was like after I performed with him because I performed half way through the set for like 20 minutes so I was already off and I went to my van which is the van you guys probably seen in the news video that’s not the tour bus cause these motherfuckers dont know their facts. Obviously you guys seen pictures of the Careless World Tour bus.”

“So that was my van that I was riding in to the next city so basically I had gotten in that van and we were waiting for other people to come in the van so we could leave.”

“So then, when Tyga left, he got in a van that looked just like mine and those motherfuckers that were disrespecting weren’t having it … So, they really wanted to act fucking ghetto … So they’re waiting outside I wasn’t parked too far from the concert so they told me that those motherfuckers mistakened my van for whatever [van] he got into…  So we were driving to the next city,  we were like 3 blocks away, and out of nowhere I hear [gun shots] and everyone is like, “Get the fuck down!””

“And I’m looking like, “Oh shit!,” so I got down. I was the last one to get down but I seen something fly past me before I got down. My arm started hurting and I look and there was 2 holes from were the bullet went through my little arm.”

“I don’t know if you seen in the news, the van had like 15 bullets going through. [The bullets] went through the bunk so if anyone was sleeping they would’ve got hit it. It went trought the trailer where all of our luggage is … [the bullets] shattered windows and cushions on the couch. And there were two kids in the van like a 5-year old and a 2-year old.  I’m not bragging about this shit im really just like trying to allow you guys to know … enable you guys’ awareness that shit like this happens all the time to innocent people, to the wrong people and even if you had hit the right person you’re still like going to hell for that shit.”

Take a look at the video below.

Nicki Minaj x Chris Brown – Right By My Side