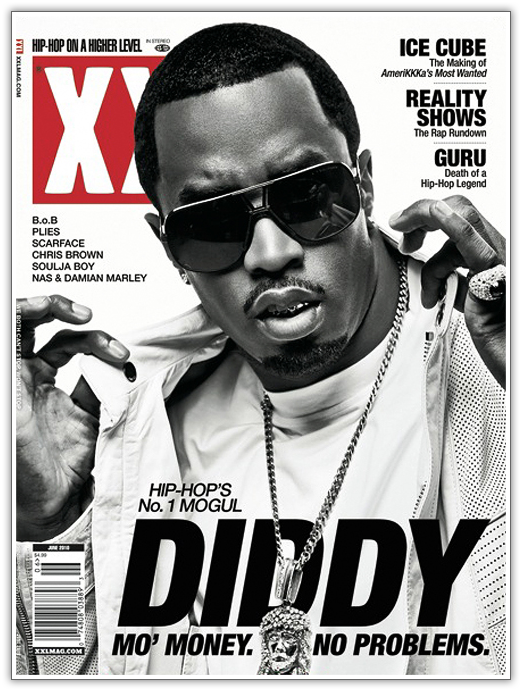 Diddy appears on his very first issue of XXL for June 2010. How ironic that the title is “Hip Hop’s No. 1 Mogul” but yet this is his first cover issue. Check out an excerpt from this issue:

Diddy stalled hopping on his Last Train to Paris to spend a little time with XXL. The hip-hop mogul appears in XXL magazine’s upcoming June issue and it’s his very first time being featured on the publications cover.

In the comprehensive interview written by Thomas Golianopoulos, Puff gives insight into his ubersuccessful business mind, his new album, Last Train to Paris and he reflects on his grind to the top to become hip-hop’s number one mogul.

In addition to the P. Diddy story, the June issue features an in-depth reported piece on the untimely death of rap legend Guru of Gang Starr. Speaking with family members, friends, his former group mate DJ Premier and close friend/business partner Solar, XXL tries to make sense of the beloved lyricist’s final days, while also exploring the mystery behind his last days.

The magazine also pays homage to the 20th anniversary to the making of Ice Cube’s classic solo debut, AmeriKKKa’s Most Wanted and gives a detailed guide to hip-hop’s plethora of reality shows.

Pick up your issue hitting shelves this month.

Pix’d Out: Cassie x Diddy in Paris at Fashion Week