Fresh off her SXSW debut, Bebe O’Hare is ready to set her name in stone as a femcee who’s here to stay. We gave a formal introduction to the femcee early 2013 but she has certainly caught the attention of many along with the sponsoring of the super-production duo Midi Mafia under new music multimedia platform, Brand X networks. Collaborating on her very first mixtape Fashionably Late with artists Wiz Khalifa, Chevy Woods, and BJ The Chicago Kid instantly separates her from other female rappers with the co-sign from some of hip-hop elites. Catching our attention with her lyrical superiority and admirable flows over classic hip-hop production gives her an edge over others in the world of rap. We catch up with Bebe to discuss the success of her mixtape before her showcase at Chicago’s celebrated venue Reggie’s Rock Club.

O’Hare started her set around 10:40PM dressed in a Chicago Blackhawks jersey, 10.Deep 5-panel and all-white Nike Air Force Ones to blaze the stage with a classic hip-hop freestyle laced on Black Rob’s 2000 hit single, ‘Whoa’. Instantly recognizable as an artist with a high rap IQ, it was remarkably impressive to see her rock the stage with no help from her officially appointed hypeman, LamboScottKing. Leaving the crowd impressed with her initial stage presence, O’Hare goes into an acapella freestyle that ignited chants from supporters and concert-goers alike. Seemingly to know her audience, Bebe goes into original tracks “Die Hard,” “South Side Music” featuring Wiz Khalifa and  ‘Money Ain’t A Thang” featuring Chevy Woods off her debut mixtape Fashionably Late. Bebe having a real passion for the music that she raps feels more than the ordinary, braggadocio tonality that comes with rap. There is an authenticity that is unmatched representing female rap. On the backend of O’Hare’s set, she performs two of my favorite tracks from her catalog, the first titled “Can’t Tell Nobody” that instantly feels familiar with an Aaliyah sample of “Are You That Somebody” that was compiled on Fashionably Late; the second track would be her freestyle “Rollin” . Bebe left the crowd with an unforgettable impression that is bound to acquire her new fans. 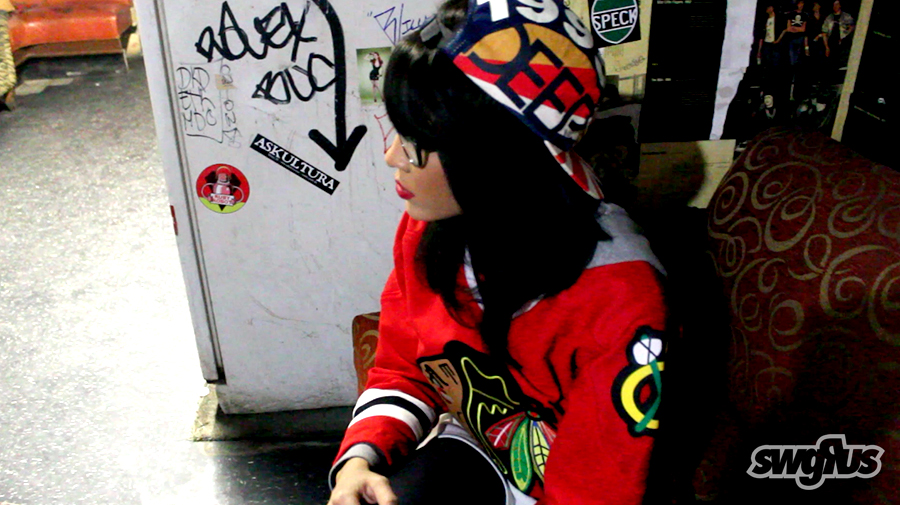 After the show, we caught up with Bebe backstage to ask her about her time at SXSW, new visuals from the project, and upcoming music.

How has the fan response been since the debut of the mixtape, Fashionably Late?

It’s been good!.I’ve been getting a lot of new fans which is the most exciting part and the old fans are satisfied which, you know, is a priority as well. I would say pretty good for a debut. People have been waiting so, I been fashionably late. I finally dropped something. (laughs).

Tell me about your following. has it increased majorly since your recent success?

The increase has been a slow and steady grind, but I kinda like that as opposed to just a quick jump. I can see when I get a new fan. I can reach out to them and have conversations with them. They’re really receptive and we have good conversation.

Seeing when you announced your appearances at SXSW, we saw a preview of the visuals for the track ‘Signs’. Will we see anymore visuals from this mixtape coming soon?

You will! “Money Ain’t A Thang” video should be coming soon featuring Chevy Woods and I have a couple more videos that I want to shoot but I’m not gon’ say no titles yet ‘cause I might have a few surprises.

Speaking of SXSW, how did it feel performing at a huge festival like this and how did that all happen for you?

This was my first huge festival and it felt really dope to be apart of it. Everybody was really cool. I mean, I was nervous because I’m in a different state, but everybody was receptive and after I got off the set people were like, “Oh, you really rap?,” & “Ok, I see you, I see you!” It was pretty cool and I got to do 4 performances down there. I had a great time!

Now Bootleg Kev, He’s a DJ. I’m very familiar with him as a radio personality. Now tell me how did that show linkup transpired?

That’s the homie! Kev is friends with my manager and they go back, so when he was in Phoenix, Bootleg Kev let me do his radio show. Now since he has moved, he was doing South by Southwest. He said, “BeBe, we’re gonna put you in the show” and showed me love.

I got to perform on there twice, so it was dope.

I actually saw yesterday some clips online from your SXSW show. You were on stage jumping around with Wiz & Chevy. Did you actually get to perform with them together?

We didn’t perform any of my songs together. I was just up there with them during their set. Me and Chevy have performed together live though, so you can anticipate live footage from me and Chevy’s show.

Now working with artists like Wiz on your very first debut, first of all, I want to congratulate you because that’s crazy. Who do you plan on working with in the future?

I have a lot of people but I want to work my way up the totem pole and be ready when I meet these people but I’m a really big fan of Drake. Jay-Z is my favorite rapper so that would be an honor. Kanye West. I want to really work with a lot of Chicago artists on the next project like production-wise, artist-wise and get home-based feel. That’s what I really have my sights set on.

Can you tell us any new producers you’ve been working with now?

My homie DJ Dahi, we gotta get back up but he’s definitely somebody I can turn to. My homeboy, Red Vision. He did a lot of stuff on Fashionably Late. I’m definitely getting back up with him. The Futuristics, I definitely wanna get back up with them and you know, just figuring everything out. And like I said incorporating a lot more of Chicago production in my songs too. 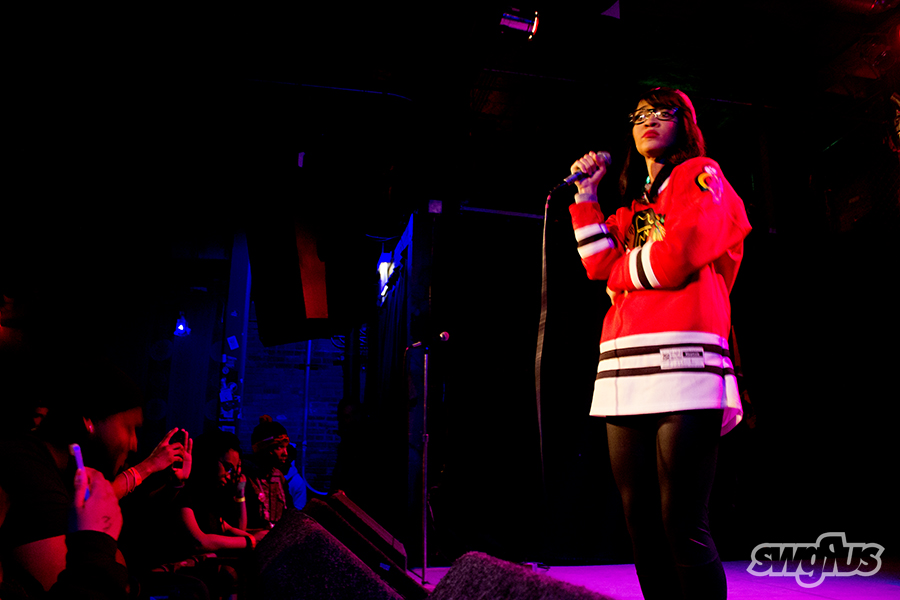 Speak about the dynamic of being a female rapper in Chicago and in general.

I think it’s like a gift and a curse. Being a girl, people kinda respect you last but they’ll recognize you first. So when you walk in a room people are like “Oh, it’s a girl!” and then “Oh, she raps?”, and “Ugh…ok.’ When I get the chance to go on the stage and do my thing, usually when I come off the stage, “Oh, you rap!”

What inspired this look for today?

This is really just my style. I mean, Blackhawks all day. Air Force Ones. 10 Deep hat. I just thought this thing was jiggy.

What are your favorite brands right now?

I would say BAPE never gets old. DIMEPIECE just because they have dope stuff for girls and I’m going to go with 10.Deep after their VICTORY collection cause that was pretty poppin’!

The first album you ever remember purchasing?

The last album you listened to?

I listened to Grace Potter and the Nocturnals.

Now I have no idea who they are? Explain them to me.

She’s different. Clearly, she’s not a rapper. It’s more alternative.I just like to listen to different sounds ‘cause I draw inspiration from everything. That’s probably the last album I listened to.

The first concert you ever saw live in concert?

En Vogue and Luther Vandross. I was 4.

If you could have stolen any artist’s song in the past two years, what would it be?

Oh, if I could’ve done it myself before they did it? Drunk In Love by Beyoncé. If I could sing, man I would be out here! (laughs)