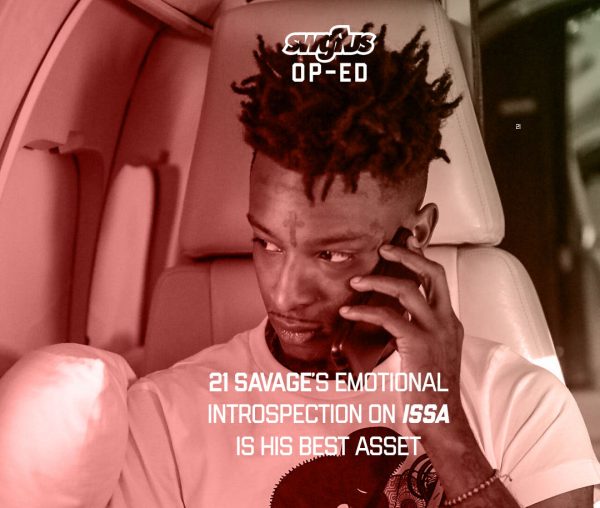 I was dreading listening to 21 Savage’s new project Issa Album. I found Savage Mode to be shallow and underwhelming.

The lean-coated trap version of DMX’s hyper-violent persona just didn’t simply do anything for me. Sure, there were some moments where I was captured by Metro Boomin’s production but 21 Savage just left me completely indifferent. Between the combination of the title referencing his meme of an interview and the almost gentle Easter Sunday album art, I was fully prepared to write the album off – a bad habit I know.

Sunday afternoon, I finally put the album on as I got in my car and I was hooked before “Famous” was halfway through. The production on the album was crisp and every heavy bass produced beat resonated through my speakers. The instrumentals throughout the entire album were infectious. Catchy and dark, every beat on the album is the same sound Savage should’ve been trying to achieve on Savage Mode.

With the production aside, the best parts of this album are 21 Savage’s moments of introspection. Sometimes brief and making up the body of the song, Savage takes a look at his rise to fame, what it’s like to be a young Black man in American, and everything in between. This introspective side of 21 Savage is something refreshing in the new “mumble rap” subgenre.

In his first song on the album, “Famous,” Savage goes through the sacrifices and difficulties he was forced to face to make it to where he is now. Filled with all of the usual tropes in a song of this nature, 21 reminds of how he has come from “Rags to riches” and how much had to “grind for this shit.” The thing Savage brings to his take on the classic “glow up” song, is his authenticity. Throughout the whole song you don’t get the feeling that Savage is putting on a front for his listeners, instead, his performance is completely believable. Whether it is his distinct voice and delivery or knowing his backstory, there is not one moment in this song that one may feel 21 Savage is putting on a persona of being something he isn’t.

Beyond this, 21 Savage begins to explore a more romantic aspect on both “Special” and “FaceTime.” Granted the term romance and trap initially seem to be at the opposite end of the spectrum, but what 21 brings in these two songs is something unique and new in the genre. In “FaceTime” 21 presents a cohesive love between him and his interest. Rather than the interaction simply being him and his desire to do things to this interest, 21 presents a relationship that is one of equal exchange and presumably interest. The chorus presents the offer to not waste each other’s time, to taste each other’s vague noun, and to ultimately not take each other’s love for granted. However, on the track “Special” we really see an emotional love described by 21. On the surface, this seems like just another song about simply throwing money around to gain the affection of a woman, but there’s more to it. 21 is open about his interest having him “in his feelings” so deep that he’s not only willing to spend all this money on her, but he has a moment of vulnerability by acknowledging that he wants to talk to her but frequently needs to hold back for fear of being a bother to her:

This may not seem like much, but when considering the often hyper-masculine culture of hip hop, especially in the trap genre, this sort of emotional vulnerability caused by a woman is a big step.

In probably his most introspective moment, 21 takes on what it has been like growing up as a black male and ultimately reaching the level of success and fame that he describes on the track “Nothing New.” He starts off commenting on the fact that he is often critiqued for only rapping about “murder and pistols.” To this, he responds that he isn’t trying to take a political stance because he is more concerned with trying to take care of his family. This small exchange plays on a theme in Kanye’s “Jesus Walks” that the only way to make money in rap is by focusing on violence and drugs. 21 then goes on to address the way in which the system is set up against black people in his second verse by describing the incarceration process as being treated like slaves and being locked up in cages. This whole verse serves as a sort of response to the critique that he doesn’t do anything besides rap about violence. With the mention of Martin Luther King’s assassination and the flooding of drugs in black communities, 21 furthers his response to the critique that he only raps about violence and drugs.

In a sound built upon hyper-aggression and lean or the eternal youth of being a rock star, this introspection and emotion is something that the new school needed. 21 Savage’s Issa Album is lyrically complex. Covering the spectrum of typical trap songs, to catchy emotional romance, meaningful moments reflecting on his life, and political thought, 21 Savage creates an entire in response to those that feel the new generation of rappers has nothing to offer.

Besides the emotional vulnerability and introspection, Issa Album is just filled with bangers.