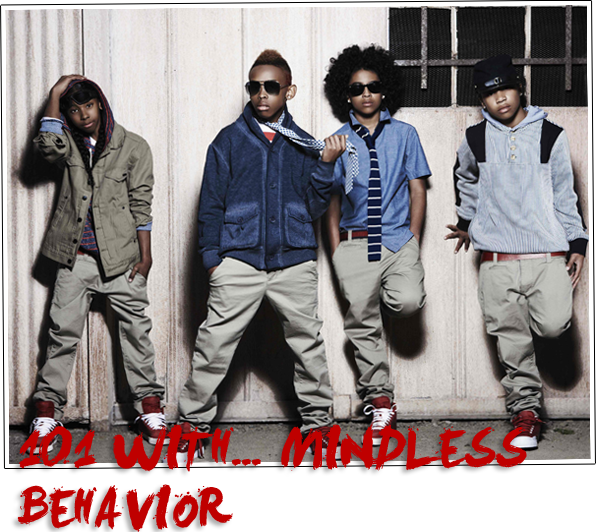 If you haven’t heard of Mindless Behavior, well, you should have… The young R&B quartet male group, Prodigy, Princeton, Roc Royal & Ray Ray, sat down with me via Skype to talk about their upcoming album, #1 Girl, touring with Janet Jackson, Justin Bieber, Diggy Simmons, plus, their favorite brands and more. The group has already collaborated with the likes of Ciara, Tyga and Lil’ Twist among other established artists. The “My Girl” singers has reached rising success since their first single and are aspiring for longevity.

Terrell: Did you guys know each other prior to fame?

Princeton: No, we didn’t know each other before the group, but Roc [Royal] and Ray Ray lived down the street from each other.

Roc Royal: We kind of heard of each other but at the same time, nah, we didn’t know each other.

Roc Royal: Actually, we all live in L.A. except for Prodigy.

Terrell: Prodigy, where you from?

Prodigy: I’m from Philly, but I live in Maryland right now.

Terrell: Ok. Now I had the opportunity to see you guys live at the Janet Jackson tour when you guys came to Chicago at the Number Ones Tour, you guys did an amazing job. How does it feel to have worked with so many great talents in your career?

Ray Ray: It feels very good. It feel like we’re working very hard to get to these points so for us to go on tour with Janet, Justin Bieber, Jason DeRulo and the Backstreet Boys; it’s something big for us. We were really excited to do these things, we’re really happy as a group; we’re getting a lot better.

Terrell: Now, how is the process working from an audience like Janet Jackson’s — having that type of audience versus the tour you guys are on now with Diggy, Lil’ Twist and y’know the rest of that crew?

Princeton:  It’s very different. I think the only tour we’ve been on that’s like our peers was the Justin Bieber Tour, but now we have our fans that come with their posters for us [and] our Mindless shirts. Being on tour with Backstreet Boys, Janet Jackson, Jason DeRulo and Justin Bieber, when we went, we didn’t see that many Mindless fans but now we see a lot of our peers like Diggy, Lil’ Twist and Tyga; it’s really cool. We can’t wait to get on the Scream Tour.

Terrell: I hear that you guys [“Mrs. Right“] have been the Most Added Urban Single, beating out hip-hop heavyweights like Jay-Z and Kanye [West], how does that feel?

Princeton: I think we were in Chicago when we found out the big news, so we  definitely excited, and it just shows that we’re working really hard.

Ray Ray: And we want to give a shout-out to our boy Diggy.

Terrell: With Mrs. Right in rotation right now, have you guys decided on what’s going to be the next single?

Princeton: No, we haven’t decided the next single. A lot of the adults like this one song called “Future” and a lot of our fans like it so we’re hoping that’s the fourth single.

Terrell: Besides Tyga, Ciara, Lil’ Twist and Diggy, who else did you guys collaboration [with] including producers on this new debut album?

Princeton: And a song with Candace Nelson.

Terrell: So you guys haven’t picked another single yet?

Princeton: No, we haven’t picked another single yet.

Prodigy: Not yet, not yet.

Princeton: “Mrs. Right” is getting really big so we just want to make it a lot bigger; Make it international, hopefully.

Terrell: As I watch you guys’ videos, I see you guys have your own style — your own characteristics of style; Prodigy you rock the mohawk, Ray Ray you rock the goggles, Roc Royal, I see you rock your hats a lot, Princeton you like to rock the shades a lot; Who inspired you guys as far as style is concerned?

Princeton: Well, our manager Keisha, creates all the clothes; For the Mrs. Right video, when we had  Football [Varsity] jackets with our names on them, she spent a week looking for a girl to make those. So, she handmade them just for us. But for me, my style influences would probably be Travie McCoy and Pharrell [Williams]

Terrell: What are your favorite brands — do you have any specific brand that you like to rock?

Roc Royal: My favorite brand have to be G-Star.

Terrell: What about you Princeton, I see you like to rock a lot of the high fashion stuff like YSL?

Terrell: What about you Ray Ray?

Princeton: Me too, I like G-Star and Vans, but I shopping out of thrift stores too. I like a lot of vintage clothes.

Terrell: Now, this is a question from your fans; Do you guys have any celebrity crushes?

Roc Royal: Mine’s will have to be Imani Hakim (‘Tanya’ from Everybody Hates Chris).

Prodigy: Mine’s will have to be Keke Palmer (True Jackson, VP).

Terrell: As far as music is concerned, who are your favorite artists?

Princeton: For all of us, it’s Michael Jackson.

Terrell: What’s the most played song on you guys iPod right now?

Terrell: Have you guys heard “Watch The Throne” yet?

Ray Ray: Yeah, we have the whole album. It’s hot!

Prodigy: I bought the whole thing, that’s what I play.

Terrell: Now have you guys met Jay-Z and Kanye yet?

Terrell: Who is the biggest celebrity that you guys probably have met thus far?

Ray Ray: I say Will Smith.

Princeton: And the Obama Family.

Terrell: Wow, that’s big, when did you guys meet the Obama’s?

Princeton: We met them a week after Easter because his daughters [Sasha & Malia Obama] were big fans of us so they invited us Willow [Smith], Grace, and Chance after Easter and we performed at the Easter Egg Roll. We got to go in the White House and meet them.

Terrell: What’s the wildest things that you guys probably have seen on tour?

Terrell: Have you guys had any specific encounters with any fans that’s been crazy?

Terrell: She bit your shoulder???

Princeton: But the worst encounter with the fans would probably have to be [in] Virginia. The fans were just real wild.

Terrell: Those are the only questions that I really have for you guys today except you guys have fun. Good luck. I wish you the best of luck — and for the fans, when does your album drop?

Prodigy: So make sure you guys got get it!

Mindless Behavior – “Christmas With My Girl”